Getting into the Spirit

Posted on December 23, 2017 by Lynda Philippsen

Twenty-two minutes before the Solstice sunset I was seated on the 41st floor of the Park Hyatt Tokyo in Shinjuku with a glass of champagne. Looking west through semi-sheer blinds diffusing the view, a large orange ball hung over the Japan Alps. Suffused by haze the orb seemed to expand as it sank toward the peaks gilding everything with shades of orange, turning the blue skies to dust and dun.

At ten minutes before, the curtains rose to reveal a clear coin of white-gold light. That burned through the haze and glowed in deepening tones of red which lit the city below, the room and even my black clothing before it extinguished like a dying wick beyond the mountains. 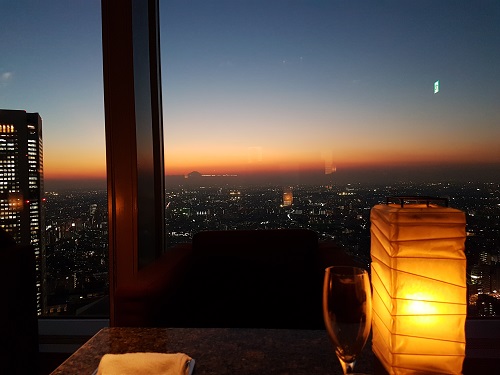 And out of the dusty line in the distance Fuji-san stood silhouetted against the sky. To the southwest a crescent moon, and lights hanging from the skyscrapers like Christmas tinsel. 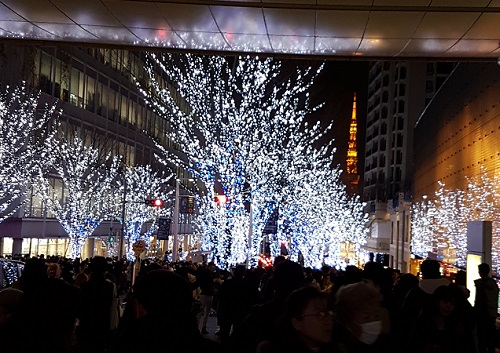 This evening I took the subway trains to Roppongi Hills where Keyakizaka Illuminations has the trees along the avenue lit up in white and blue (with brief shifts to romantic red), framing Tokyo Tower which  glows orange. 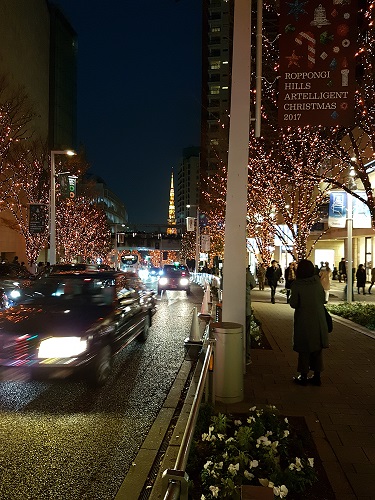 The streets were a crush of families, couples on dates, entertainment in the plaza, groups of Santas cruising by on high-performance motorcycles and wandering the streets. 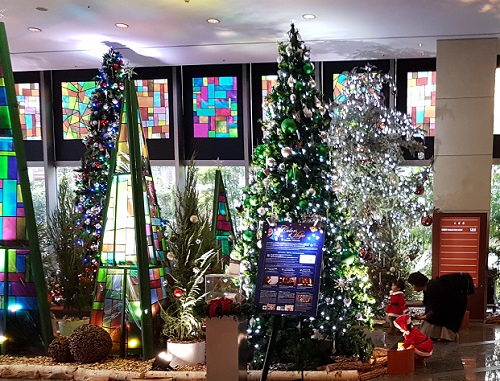 Two adorable Santa-toddlers enjoyed the Christmas trees in the lobby of the Grand Hyatt Tokyo.

And, I had to laugh. Even in a high-end store, a [blank] Christmas sweater is still a [blank] Christmas sweater. Choose your own adjective. That said,  I wouldn’t kick the black one out of the closet if my Santa’s pockets were that deep. (But I would secretly wish that Santa–who knows naughty from nice, for goodness’ sake–knew me better than that.) Now that an intense push through classes before the winter recess is over (more on that later), I can focus on the joy that is Christmas: favourite carols playing from the USB drive, the “fireplace” cracking on screen, things to nibble on in the fridge, the tree lit and bubbles rising from a glass. Lunch with friends scheduled for tomorrow, more illuminations and a reservation for brunch set for Christmas Day.

As always, much too soon (like the ikebana arrangement I must pull apart one brief hour after I’ve made it) the season will have passed. Mono no aware. The evanescence of things.

This entry was posted in Japan, Travel & Culture, This & That and tagged Christmas, Winter solstice. Bookmark the permalink.